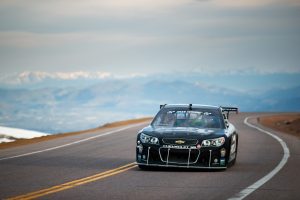 FOUNTAIN, Colo. (Feb. 19, 2020) — Rob Parsons, better known as the “Chairslayer,” will make his inaugural appearance June 28 at the 98th Broadmoor Pikes Peak International Hill Climb, brought to you by Gran Turismo.
The 33-year-old wheelchair-bound athlete from Salt Lake City will be the first paraplegic driver since 1988 to compete without a co-driver. In 1988 Charley Hexom piloted his raced truck to the summit on an all-gravel course. Parsons will be the first paraplegic to make the famed run, solo, on a fully paved course.
Parsons will be driving Pikes Peak International Raceway’s 2010 Chevrolet SS in the loaded Pikes Peak Open Class, where he’ll face some top finishers from last year including Layne Schranz, who ran a sub-10 minute race, and Raphael Astier, who was the Time Attack 1 winner setting a new record.
“The car that Rob Parsons will race this year, modified with a hand-control system, is the same one that Tommy Boileau ran in last year and captured Rookie of the Year,” stated Megan Leatham, Executive Director for the Pikes Peak International Hill Climb, “It’s a great car, and with Rob’s talent, we’re excited to see what he can do.”
Parsons, already a noted drifter, BMX rider and motocross rider, found himself at the end of a bad dirt bike accident in 2011 that shattered his legs, severed his spine and punctured a lung. After recovering from the injuries and an E. coli infection, he set about figuring out how to return to motorsports without the use of his legs.
“After my accident, I knew I wasn’t going to walk again,” said Parsons. “The only option was to accept what happened and find a new sport, and racing cars was the sport that renewed my purpose and gave me hope.”

It will be a return to Colorado Springs for Parsons who has also driven for Falci Adaptive Motorsports. The program pioneered by Dr. Scott Falci, lifts the spirits and dreams of mobility-challenged auto-racing enthusiasts with cutting-edge adaptive technology. Parsons starred in PPIR’s Hot Rod Rock & Rumble event with the Falci Adaptive car last September.
Former Furniture Row Racing President, and current Pikes Peak International Raceway COO, Joe Garone said, “As a Colorado native who’s always had an appreciation for the race, we’re honored to have this opportunity. Originally a Furniture Row Racing Cup Car, our entry has been purpose-built for the Hill Climb by the talented PPIR team. With Rob as this year’s driver, we’re again excited to make a competitive run at the mountain.”
Parsons started the Chairslayer Foundation to help others who face the same traumas, inspiring thousands of wheelchair-bound individuals to push beyond boundaries and try new things. He invented the world’s most advanced hand-control system for drifting and was the first wheelchair-bound driver to compete in the USA.
“PPIR and the Hill Climb have a long history together. I can’t wait to add another chapter as the first wheelchair-bound solo competitor to summit America’s Mountain,” said Parsons.
Both the Chairslayer Foundation and Falci Adaptive Motorsports give people with disabilities a chance to get behind the wheel again, giving them an experience, they’ll never forget.
# # #
Media Contact: Chelsy Offutt
Director of Communications
Pikes Peak International Raceway
719.382.7223 x 119
Chelsy (at) PPIR.com
Chairslayer, Falci Adaptive Motorsports, Hill Climb, Pikes Peak International Hill Climb, Pikes Peak International Raceway, PPIR, Race to the Clouds, Rob Parsons
Follow Us On
Sponsors
© 2020 Pikes Peak International Raceway All Rights Reserved | Privacy Policy Web Design: Vortexmiami