Tommy Boileau drives the #34 PPIR-Pikes Peak International Raceway Car in the 97th running of the Pikes Peak International Hill Climb, Colorado Springs. The car is a former NASCAR Cup road course car powered by a turbocharged LS3 motor running on E85 fuel. Tommy was the fastest rookie, the 13th fastest car and 18th overall with a time of 10 minutes, 34 seconds. For those who are not familiar with the Hill Climb – this time is considered very fast.  There are some spectacular views in the video as Tommy speeds along the edge of the road well in excess of 100 mph on the way to the summit.  The PPIR Team put together a flawless day of preparation and racing. Thousands of fans saw the car and we personally greeted hundreds of people in the paddock during the hours leading up to the run.  Fortunately the rain and sleet held off until after Tommy’s run to the finish line.

The race is on a 12.42-mile intense and dangerous course, with 156 turns, beginning at 9,390 feet and finishing at the 14,115-foot summit of America’s Mountain Pikes Peak. As the drivers climb toward the summit, the thin air slows reflexes and saps muscle strength. 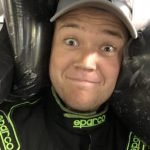